Does and on what conditions parody effectively defend against copyright and trademark lawsuits? A look at the Zorro case


With the decision No. 38165 of December 30th, 2022, the Italian Supreme Court provided some guidelines on whether and under which conditions parody can be invoked as an effective defense against allegations of copyright and trademark infringement. The lawsuit dates back to 2007 when Zorro Productions Inc. sued CO.GE.DI. Ltd. for producing and broadcasting a commercial in which an Italian notorious actor ironically played the role of Zorro to promote a branded water.


In particular, the plaintiff claimed the violation of its copyright and trademark rights over the fictional character born from the pen of Johnston McCulley with the publication of the novel “The curse of Capistrano” (later named “The mask of Zorro”) in 1919. The defendant counterargued that the copyright over the known masked knight was expired and, consequencly, the work was in the public domain. He also called for partial revocation for the non-use of the trademark as regards soft drinks.


The Rome Courts of First and Second Instance reached opposite outcomes considering that the former acknowledged the violation of Zorro Productions Inc. intellectual property rights while the latter sided with the defendant.


It should be premised that the Italian Supreme Court, with the decision No. 32 of January 3rd, 2017, already affirmed that copyright over the book “The mask of Zorro” and its main character was not expired because the Bern Convention established that also foreign works published in Italy should enjoy the same protection provided by the Italian copyright law, i.e. 70 years post-mortem auctoris duration.


The referring Court found both the copyright and trademark infringement on the grounds that the Italian legislator did not implement the parody exception provided for in Art. 5.3 of the Directive 2001/29/EC. Moreover, the revocation for non-use of the here-mentioned trademark has been excluded because Zorro Productions Inc. gave evidence that the mark was licensed to Coca Cola for advertising soft drinks.


The losing party appealed before the Supreme Court arguing, inter alia, that established case-law had already granted the parody exception as a subspecies of the exception for criticism and discussion laid down in Art. 70 of the Italian copyright law. According to the Supreme Court, a parody should be regarded as a humorous or mocking elaboration of the elements characterizing another work. As such, parody constitutes a derivative work that is exceptionally exempted from the authorization of the author of the parodied work in order to ensure the superior value of freedom of expression. Nonetheless, Art. 70 conditioned the lawfulness of parody to the fact that it does not conflict with the economic exploitation of the previous work, in compliance with the three-step test.


The Rome Court of Appeal erred in excluding the parody exception because the commercial took the characterizing features of the fictional character. However, this cannot be the correct benchmark because it is a structural element of parodies. The assessment should consider the trade-off between the interest of the author to exclusively reap the benefits of its creative work(s) and that of parodists to exercise freedom of expression to enhance follow-on creativity. It means that the Court of merit should assess whether the commercial by CO.GE.DI. eroded the economic opportunities linked to Zorro.


From the side of the trademark infringement, the Court endorsed the approach adopted by the settled case to consider parody as an ineffective defense because it usually entails a parasitic attachment to the qualities and values of the mark. Indeed, even before the amendment of Art. 20 of the Italian Industrial Property Code through the Legislative Decree 15/2019, trademark infringements have been found not only when the mark is directly used as a distinctive function of a good or service, but also when there is an undue advantage of its qualities so that it can raise the attention of consumers, as it happens in parodies.


It will be interesting to see which spaces of commercial exploitation will be freed when the copyright over Zorro will expire (in “just” five years), considering that trademark rights are potentially eternal. This issue of overlapping intellectual property rights will be first addressed with Mickey Mouse, whose copyright will expire at the end of 2023! 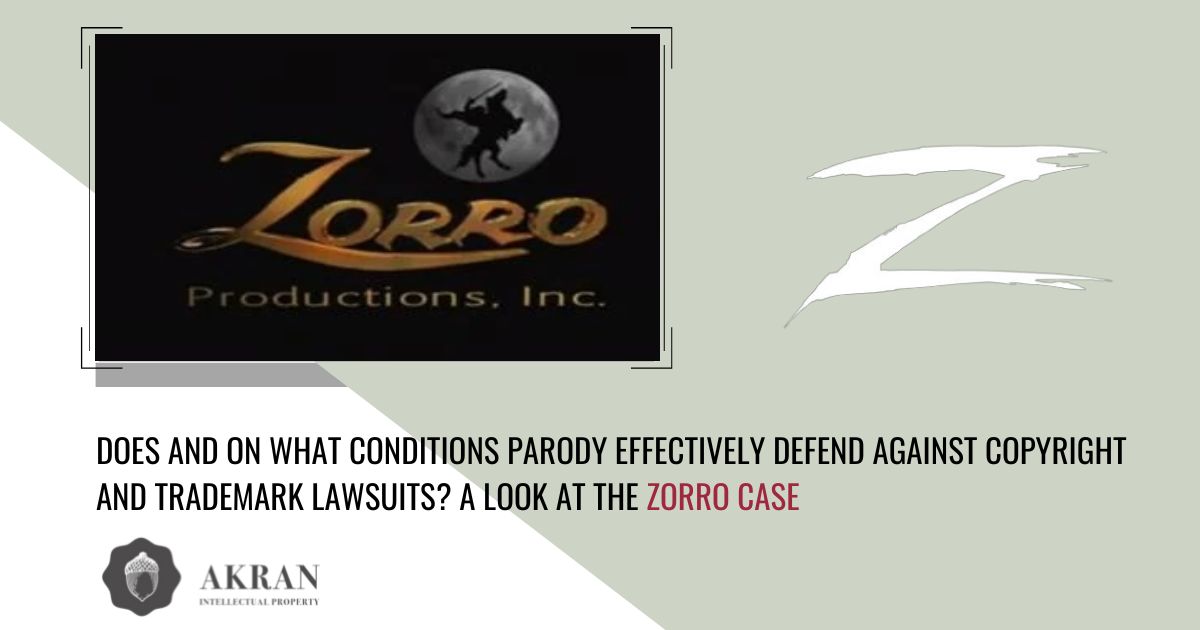