The plaintiff’s claim is based on Sheeran’s alleged copying of some elements of “Let’s Get It On”, namely the chord progression and the harmonic rhythm (in musical jargon collectively referred to as “backing pattern”). The defendant counterargues that the lawsuit is baseless because the combination of two elements is not sufficiently numerous or original to trigger copyright protection. Moreover, the backing pattern is not identical or nearly identical to that in “Thinking Out Loud”.


However, according to Judge Louis L. Stanton from the S.D.N.Y., the law does not support Sheeran’s contention because «there is no bright-line rule that the combination of two unprotectable elements is insufficiently numerous to constitute an original work». Indeed, compilations of generally unprotectable elements can be afforded copyright protection if the author has selected, coordinated, and arranged the element of his or her work in an original way ¹ . Since such a question is reserved for the factfinder, it must be left for trial. Hence, summary judgement is inappropriate.


This conclusion is bolstered by the diverging outcomes from music experts, considering that some of them look at the backing pattern as uncommon before “Let’s Get It On”, while others allege the existence of almost three prior works with the same chord progression and harmonic rhythm. The experts’ disagreement requires a further assessment of material facts which cannot take place with summary judgement.


Apart from the interpretation and application of the substantial similarity test to the case at hand, this litigation appears worthy of attention for the damages that the plaintiff is seeking to recover. He claims that profits should include also those relating to touring revenues, such as concert tickets and concert merchandise sales. Structured Asset Sales’ request is grounded on the assumption that the separate acts of infringement that arose when Sheeran performed “Thinking Out Loud” at concerts are linked to the direct profits from those concerts because concertgoers purchased Sheeran concert tickets mostly to hear this hit. Sheeran replied that there is no causal nexus between the infringement and the gross revenues from his shows.


As regards the classification of profits, the S.D.N.Y. made a distinction between concert tickets and merchandising.


The former should be considered direct profits because they are derived from the use of the copyrighted work. The plaintiff gave evidence of this causal nexus by providing an expert report which calculated that the portion of concert ticket revenue attributable to the live performance of “Thinking Out Loud” ranged from 13,3% based on a method of calculating according to Spotify streaming statistics. However, it seems fair that trial judges will take account of the independent contribution of the author to the success of the work, like the performer’s fame and his ability to capture the audience’s attention. This principle has been recently affirmed by the Italian Supreme Court ² to avoid the misuse of copyright to spread parasitic behavior linked to fortunate events.


Conversely, concert merchandise is not generated by the live performance of “Thinking Out Loud” as there could be a myriad of reasons why it would be purchased by concert goers. Judge Louis specified that copyright law does not allow for speculative recovery. Even merchandise with the wording “Thinking Out Loud” would not be considered profits linked to the infringement because copyright would eventually concern the music and not the text (in this case the title of the song).


In a nutshell, Manhattan trial judges will assess whether Ed Sheeran “Thinking Out Loud” infringes copyright over the song “Let’s Get It On” and, if so, whether and to what extent damages stretch to the concert tickets sold. Stay tuned for any updates on this compelling case! 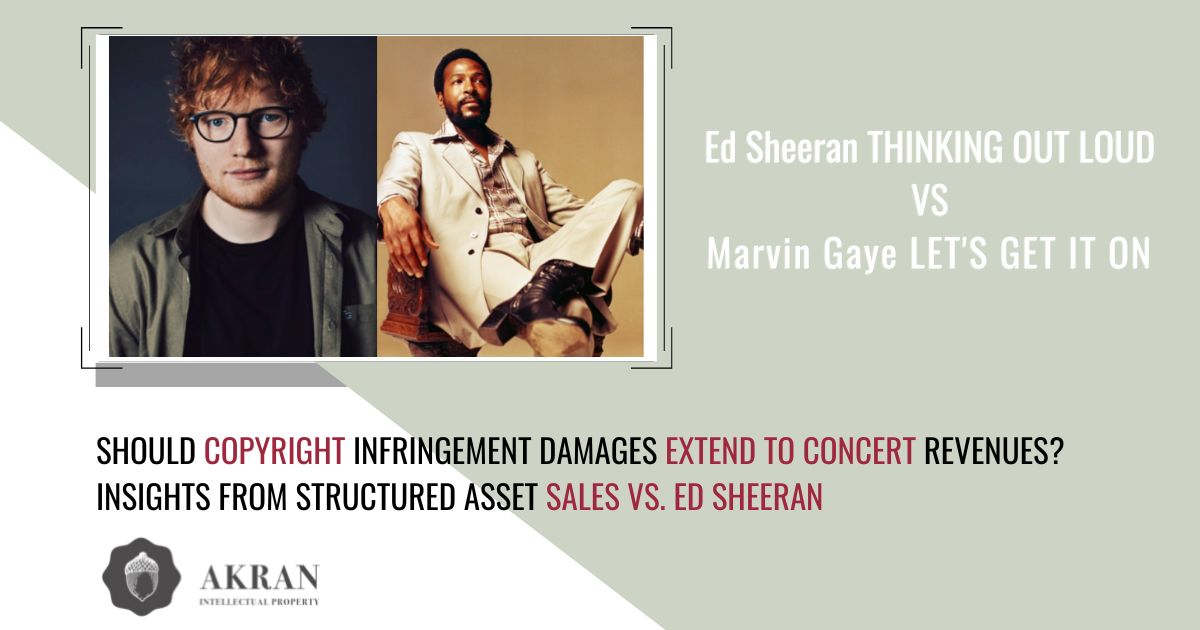